goodWORKSconnect.org has been my largest nonprofit consulting project to date. It was a regional social networking site and knowledge base designed to foster collaboration and exchange within the nonprofit community in downstate Illinois. I was on the design committee organized by the Lumpkin Foundation, and was integral in shaping the site in terms of functionality, interface, and user experience.

My primary duty was as a liaison or translator between the nonprofit community stakeholders on the committee and the web development firm we hired to build the project. I identified the needs expressed by the committee and translated those into the technologies and design elements that we requested from the developers. I was most influential in designing forms and interfaces to ensure collection of uniform and accurate user information for organizational profiles, the events calendar, and the resource-sharing sections.

I also did extensive cross-browser compatibility and usability testing on the site prior to launch, and learned a lot about the strengths and limitations of Joomla, the tool we eventually selected for the site backend. Finally, I participating in the marketing and outreach campaign to promote the site, culminating in the official launch and the 2009 Downstate Illinois Nonprofit Conference.

After launch I had an ongoing role in the community as a site moderator and topic guide specializing in nonprofits and technology, and as a consultant specializing in building and nurturing online communities. The site has since had a full redesign and a change in focus, and I haven’t been a direct participant in the project since sometime in 2011. 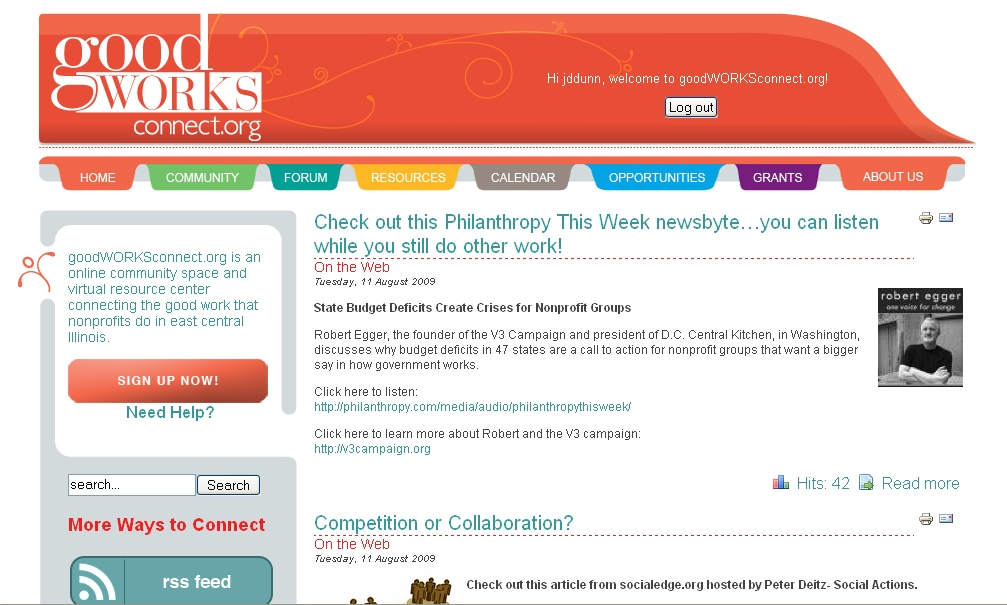 Front page of GoodWorksConnect as it launched.